BTB EP #005 How Life Can Press Greatness Out of You With Jhonas Lewis
BTB EP #004 Persistent Passion & Intentional Serendipity
BTB EP #003 Filling Your Cup By Drawing Lines In The Sand
BTB EP #002 Hulk Through Your Shell With Jamie Doreschuck
BTB: Ep #001 – Setbacks Are Stepping Stones 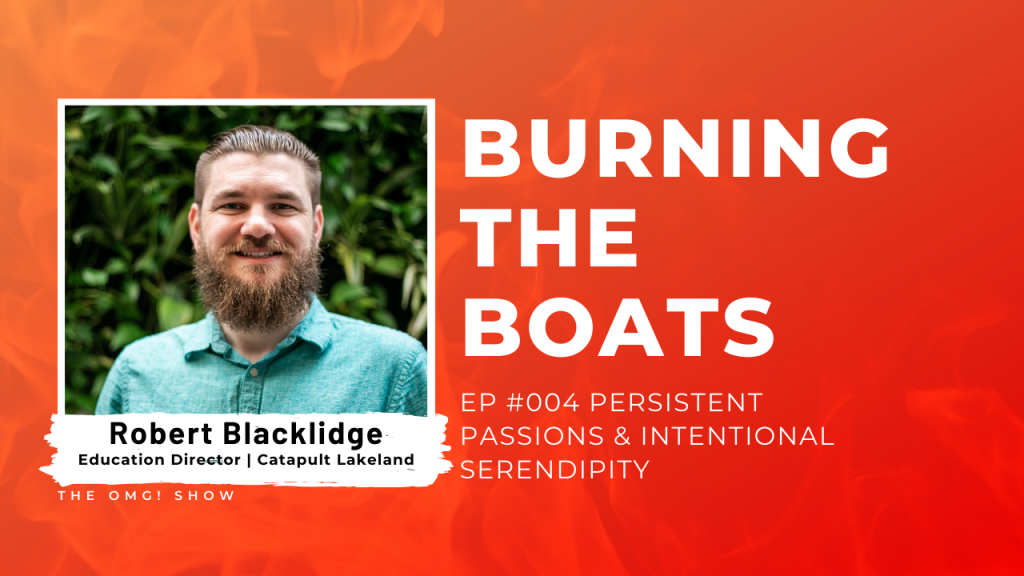 In this episode of Burning the Boats, Oscar interviews entrepreneur and special guest, Robert Blacklidge of Catapult Lakeland, a coworking space dedicated to launching Lakeland’s entrepreneurs. Robert, affectionately called the Startup Santa, works closely with entrepreneurs and military veterans to provide insights and mentorship as they face the many challenges of entrepreneurship.

Today on The OMG! Show: Burning the Boats with special guest, Robert Blackledge.

3:09 Oscar asks Robert to share about the shift from the hole trying to be filled with money to his mindset of giving value.

10:01 Oscar asks Robert how he fell into the restaurant business.

14:32 Oscar observes that Robert was getting his MBA and decided to go into one of the riskiest markets as his first business and did well for the first two years.

15:14 Oscar asks Robert about his next move and mentality for crisis management.

19:40 – Oscar asks Robert if you can teach someone not to follow the money or if they need to go through their own journey to realize it for themselves.

32:02 – Oscar underscores that pain is a great motivator and that Robert’s process is emotionally based. He asked Robert how he came up with it.

25:10 – Oscar recaps Robert’s journey and asks him his tangible next step.

36:33 – Oscar identifies a common theme among the entrepreneurs he knows and the importance of being around other entrepreneurs to recognize they are not alone.

38:44 – Oscar identifies the recurring theme for Robert of “what’s next” and asks him his WHY.

Oscar M. Garcia is an online direct response expert. He is a sought-after consultant, coach, and speaker specializing in research, facebook ads, funnel implementation, and email sales sequences. Win the freedom you want online when you leverage Oscar Garcia's expertise and experience.

The Power of Making A Decision

A Thought About Fear and Why It’s Your Best Friend

Waking Up, Business, and Gaining Momentum