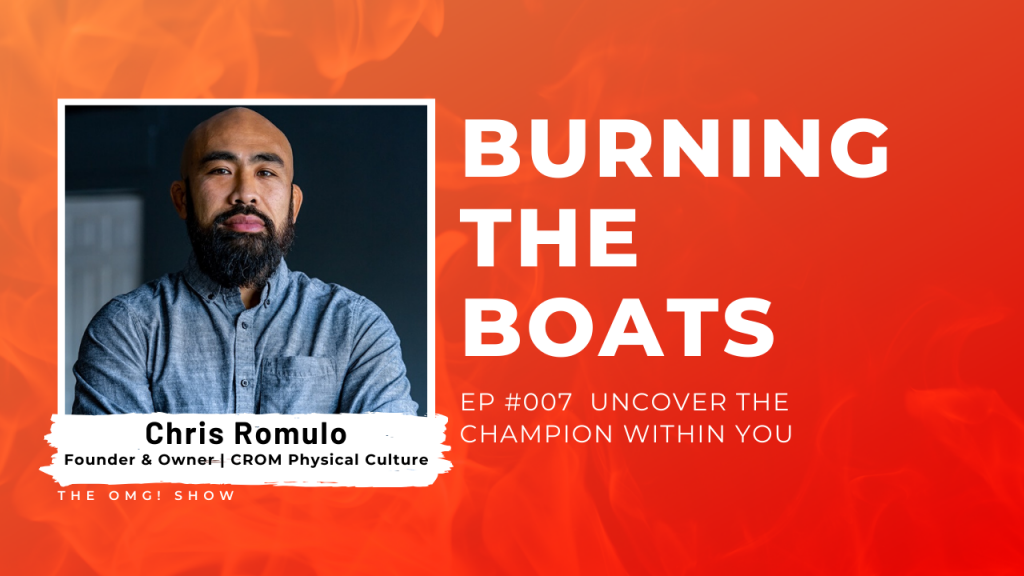 BTB #007 Uncover The Champion Within You With Chris Romulo

In this episode of Burning the Boats, Oscar interviews entrepreneur and special guest, Chris Romulo of Rockaway Beach, New York’s CROM Physical Culture. Chris shares the journey of being a professional fighter and ultimately owning his own gym to grow, train others to have a mindset of respect and growth, and serve the community around him by giving back.

Today on The OMG! Show: Burning the Boats with special guest, Chris Romulo.

1:32 Oscar asks Chris to share his upbringing and if he ever saw himself doing what he does now.

9:00 Oscar encourages listeners by the loving marriage and family Chris has now and how he’s turned his life around.

12:58 Oscar asks Chris if he felt like the environment where he felt safe ever turned his back on him and where he changed his direction.

18:28 Oscar recaps Chris’ defining moment and journey to Muay Thai and asks him if his mindset was changing as all of this was happening.

20:24– Oscar asks Chris if he had a role model growing up in the streets as a teenager.

21:05 – Oscar recaps Chris’ journey to discovering Muay Thai and asks what happens after he gets into the Muay Thai gym.

23:41 – Oscar asks Chris how respect transformed him from the person he was to now.

25:16 – Oscar asks why he stopped training with Chris

33:14 – Oscar recaps Chris’ life as a young father at 23 and how he was trying to survive but recognizes the theme of the respect mentality and at the end of the day, he didn’t let circumstance affect his responsibility. He asks what happened from there.

40:35 – Oscar asks Chris what becoming a professional fighter meant to him.

43:00 Oscar quotes Mike Tyson and asks Chris to help him understand the mentality of a fighter and how he prepared himself for that.

49:00 – Oscar recognizes it took Chris 5-6 years to become a fighter and 7 years to start his gym and asks how long it took for him to get to the next level in his business.

55:18 – Oscar shares about the gym, the members and the Instagram and reiterates that over the course of Chris’ life, the theme of respect propelled him along with his goal.

Oscar M. Garcia is an online direct response expert. He is a sought-after consultant, coach, and speaker specializing in research, facebook ads, funnel implementation, and email sales sequences. Win the freedom you want online when you leverage Oscar Garcia's expertise and experience.

The Power of Making A Decision

A Thought About Fear and Why It’s Your Best Friend

Waking Up, Business, and Gaining Momentum